Goyard duffle, yeah yeah
Got that draco in it, yeah yeah
Whip a chicken, yeah yeah
Tryna break the pot, yeah yeah
And I got that Glock, yeah yeah
I got thirty shots, yeah yeah
Got your baby mama, yeah yeah
She bent over nigga, yeah yeah
Young Savage trappin', yeah yeah
And I'm fuckin' rappin', yeah yeah
I make lots of money, yeah yeah
And I throw it, throw it, yeah yeah
Ayy lil bitch you tryna blow it, yeah
Woah, chopper like a lawnmower, yeah
Woah, got that motherfuckin' dagger on me
Woah, stab a nigga and his lil homie, woah
And I'm ballin' like Nowitzki, woah
I get head like Lewinsky
Police tryna fingerprint me, woah
I'm runnin' out that motherfucker, nigga, woah
Get money like a motherfucker, nigga
Bags in, nigga gas in
Cash out, nigga cash in
I'm robbin', ski maskin'
You niggas know that I'm 'bout action
Fishtail with the traction
Fuck a fistfight, nigga I was blasting
Air that motherfucker out, we was smashin'
Got them VVS's on me, nigga glass
Fuck school nigga, always skipped class
Fuck the other side, throwin' red rags
Slaughter Gang, PDE gon' do you bad nigga
Runnin' through this cash, through this cash nigga
And my bitch bad, bitch bad nigga
Yeah, and I got a bag, got a bag nigga
Why these niggas mad, why they sad nigga
'Cause I'm poppin' ho, yeah I'm poppin' ho
Got your main bitch, pussy poppin' ho
We don't want that pussy, we just want that toppy ho
And I don't want it if the shit ain't sloppy ho
Yeah, gang gang, nigga gang gang
Ayy, niggas snitching in the chain gang, ayy
They must not know they go in the chain gang, ayy
Stab 'em up, nigga stab 'em up
I'm a Bentley truck, you in a Acura
You niggas actin' like I ain't got racks or somethin'
You niggas actin' like I ain't in the trap or somethin'
Fuck you niggas thought, Savage was just rappin' huh
Hey, your main bitch, she gon' back it up
21, that two-two-three gon' make you back it up
21, that show money I just stack it up
21, I'm real gangster, you just acting tough, woah
Niggas tryna put the feds on me, woah
My young niggas droppin' shells on 'em, woah
I know they scared now, scared now
Niggas broke, they can't even pay they bail now
Ayy, I get a brick and I bust it down, nigga
Put it in the pyrex and drown it, nigga
Water whip the dope, water whip it
Ho, water whip your ho, water whip 'em, yeah
Them VVS's got her hypnotized, yeah
I used to walk around with two nines, woah
Then I hit a nigga for two nines, 21
That's a half a brick lil nigga, 21
You a fuckin' shrimp lil nigga, 21
I got somethin' for that lip lil nigga, 21
Have you with a limp lil nigga, 21
Cut you up, no temp lil nigga, yeah
I get money 'cause I'm rich nigga, yeah
I might fuck all on your bitch nigga, yeah
Got a drank in in the vip nigga, yeah
She want a gangster, not a wimp nigga, yeah
Burberry fur on me, shit, woah
Thirty, Steph Curry on me, shit, woah
Eating chicken curry in this bitch, woah
Good food, nigga good food, 21
I'm a gangster, you a good dude, 21
I won't text her 'til she send nudes, 21
She call my phone when the rent due, 21
I ain't got a dime for your stankin' ass, 21
Wash your behind with your stankin' ass, bitch
And your nigga broke, down bad, bitch
All my niggas havin' fuckin' bags, bitch
Rich niggas, rich niggas, rich, 21
Hit nigga, hit nigga, hit, 21
That stick nigga, stick nigga, stick, 21
Bricks nigga, licks nigga, hits, 21
Slaughter Gang, PDE the shit, 21
Got the rap game on lock fast, 21
Got the block game on lock fast, 21
I got that Glock aim on lock fast, 21
I drop cop and send shots fast, 21
You only gangster when the gangsters gone, 21
You just a pussy with a camera phone, 21
You just a bitch with an Instagram, 21
No trigger finger, I got a trigger hand, 21
All of 'em like to shoot nigga, 21
All of 'em like boot nigga, 21
All of 'em in your boot nigga, 21
Finger holes, nigga finger holes, 21
You just a pussy with some finger rolls, 21
I can't respect a nigga with cornrows, 21
Broke nigga with your brother's clothes, 21
Broke nigga fuckin' your brother's hoes, 21
Get your own nigga, get your own, 21
You ain't grown, nigga you ain't grown, 21
Your money brown and my money long, 21
My blunt green and my gas strong, 21
Your bitch bad and I got her number, 21
All her friends wanna throw a slumber, 21
I might fuck all on that bitch mama, 21
I might take that lil bitch out that Honda, 21
Put that lil bitch in a Benz, yeah, 21
I wish that bitch had a twin, yeah, 21
She want all my friends, yeah, 21
Man that bitch got on some Timbs, yeah, 21
But I put that bitch in Gucci Gucci, 21
Man I fuck that bitch like she Karruche, 21
I might lick that, do the oochie coochie, 21
Got a brown one like a nigga Boosie, 21
Nigga catch me all up in Bruce's, 21
And you know I pull up with that uzi, 21
I'ma shoot a nigga, make the news and, 21
Niggas umm, niggas niggas losin', 21
Yeah yeah, nigga yeah yeah, 21
Serve a nigga with no scale scale, 21
Come and help me wrap this bale, bale, 21
Fuck 12, no seatbelt, 21
Fuck 12, I don't need help, 21
12 gauge, nigga that's my help, 21 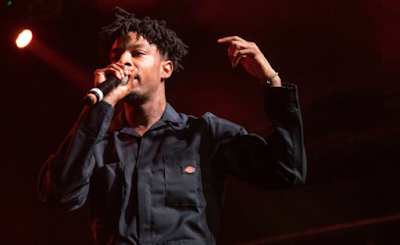